Whale Watching in the Shadows of the Highlands

Nova Scotia's northernmost coastline is lined with scenic highland mountains that rise from the waves and tower over the sea: you are literally whale watching in the shadows of the highlands. This scenic highland coastline is home to many unique historical, cultural and geological features such as Cabot's Landing, the famous John Cabot landing site of 1497; St. Paul Island, The Graveyard of the Gulf; unique geological formations consisting of granite, slate and quartz; and many other wondrous locations. Below, we have information on three of many experiences unique to Oshan Whale Watch. 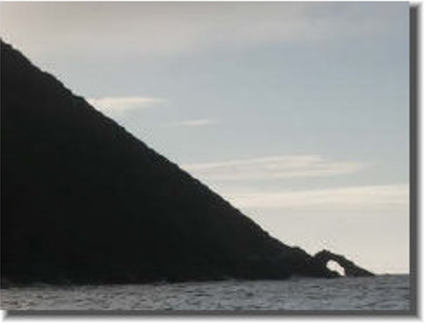 The Hammer: Hidden in Highland Shadows

West of Bay St. Lawrence is one of the unique geological formations native to Northern Cape Breton, a free-standing arch as old as the earth itself known as the Hammer. The Hammer, and the coastline off Bay St. Lawrence, has remained untouched for millions of years and is some of the oldest exposed rocks in the world. The Hammer is also a great place to set lobster traps, and a string of the Oshan's traps can be found here every spring. Fresh lobsters from the hammer, are available at the local Victoria Co-op Fisheries in Bay St. Lawrence.

East of Bay St. Lawrence is historical Money Point Lighthouse (top right). This lighthouse marks a long shoal which earned its name because of treasure ships that went down to her hidden rocks.

Further information on Money Point Lighthouse and and other historical features can be found at:

Want to see Money Point by land? Then take a guided hiking tour with our friends at:

White Rock Gulch in the rain.

Just outside Bay St. Lawrence harbour is White Rock Gulch (bottom left) a small hidden beach, sheltered on both sides by protruding rocks, and a huge wall of white quartz. This beach, fed by a small waterfall, was a traditional lobster-boil beach for the early settlers of Bay St. Lawrence. Here the shelter and fresh water made the perfect place to enjoy pots of lobsters with the clan at seasons end. Even Captain Fraser has fond memories of his childhood lobster boils, which were enjoyed by the entire village.